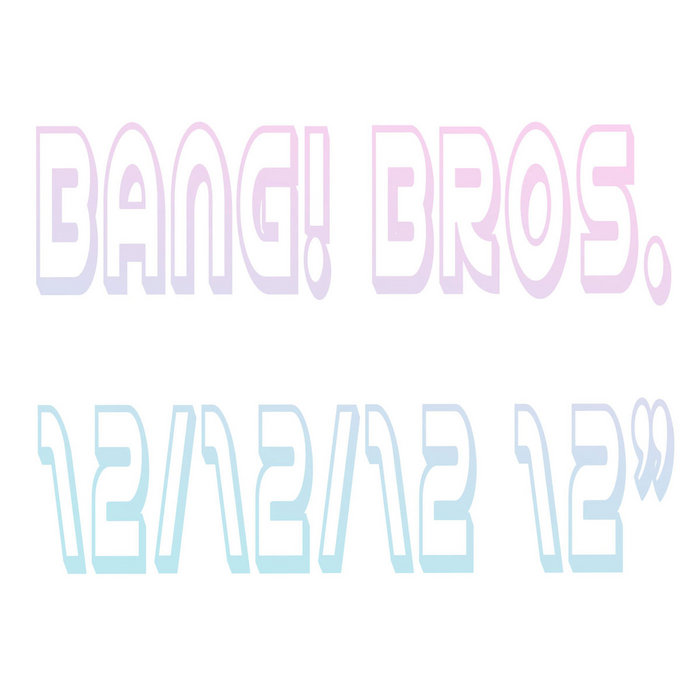 "Bang! Brothers means many things to many people. Look the phrase up on your interweb, and you will discover many facets of amateur erotica that may have previously escaped your notice. But that is only one of its connotations. In its best sense, Bang! Bros refers to the ridiculously ecstatic duo of Mark Johnson and Arkm Foam, best known for their work with the Whitehaus Family and Hunnie Bunnies. Both of the gents have now moved away from Boston — where Bang! Bros were based — but not before the threw dawn and took the challenge to play 12 live shows in 12 cities on 12/12/2012. You might think to yourself, in a Scottish accent — that cannae be done! But this here record is proof that it can and that it was.
Johnson and Foam were working in a strangely reductive format here — improvising freely with drum machines and other small electronic devices — but they manage to fill the air with all sorts of invention. Most such duos rely heavily on either pure noise or long-format drones, but the music here is jumpy and weird without being overwhelming. There is, of course, a built-in obnox factor with the ADHD-derived idea of playing this sort of music in this sort of format on a “tour” of this kind, but hey — it works really goddamn well. I’m not sure they really take the idea of rhythm box as lead instrument as far as it can go, but they sure as hell push it as far as it has gone thus far.
What a great racket! "– Byron Coley, 2014

"Mark Johnson & Adam Foam (Whitehaus, Hunnie Bunnies, Peace Loving) invent a sorely-needed new free jazz instrument: the drum machine. Instead of stuffing their mouths with too many horns, they use their faces & fingers to punch on too many electronic buttons like Cecil Taylor with his fingers in a wall socket. Pauses, whirs, percussion avalanches & whizbang punch lines with real punch in them. Documentation of their ridiculous attempt to tour 12 cities in 12 hours on 12-12-2012, using battery powered little amplifiers. I myself went to the show in Cambridge, which took place at 9am on the lawn in front of City Hall, and was attended by 4 or 5 freezing passersby, a wedding party, a reporter from the local paper, & a policeman who was distracted from looking for traffic violations. Both gents have since moved away, to Philly & Western Mass respectively, but the band was damned beautiful while it lasted." --Angela Sawyer, Weirdo Records; Edition of 300 copies.

It almost seems like a dare: two guys on duct-taped, head-to-head drum machines, programmed with a cornucopia of sounds and appropriately hot-wired for maximum fuh, attempt a world record of playing 12 brief sets in 12 cities on December 12, 2012. Their setting is New England; Massachusetts and Rhode Island, specifically, which facilitates shorter distances between recognized cities. It’s a concept that at times looms the work being done here, which is to translate sample triggers to the concept of improvisational music in a guerrilla setting, using non-traditional instruments. But really, what should be a tradition in improv, where performers should get to make their own rules? Bang! Bros. certainly have enough clatter to back up any ensemble, and the additional sounds they add to the proceedings (voice blips, dub FX) fill out the sound to the extent that each of the 12 pieces sound completely of their own. The Lowell, MA set in particular is mighty and harsh, maybe a passive response to playing in the vicinity of RRRecords. 12/12/12 12” is a tough sell in the guise of a bearded gimmick, but for some of you, this is going to work. And if they did knock the Flaming Lips from the record books, all the better. 300 copies. (Doug Mosurock)

Bandcamp Daily  your guide to the world of Bandcamp

MF DOOM is given his flowers, plus appearances from MC Jada Imani and Stanley Ipkuss